VE Day: Time To Stop Remembrance Of War And Celebrate The Legacy of Peace Instead 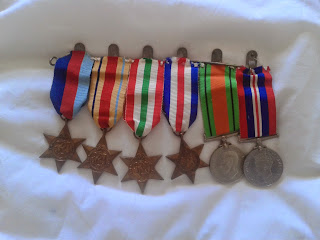 In the drawer next to my bed I have a plastic bag with my father's WW2 campaign medals in it. Given that I'm only in my mid forties this makes me fairly unusual I suppose. Indeed, growing up I barely knew anyone my age whose Dad had fought in the war and this was both a great source of pride and fear. Invariably the fear triumphed over the pride. Throughout my childhood, I had a recurring nightmare in which he was taken away to war again and didn't come back. My Uncle Charles was still in the forces in those days and had lost an eye and his sense of taste and smell at Tobruk, so it didn't seem so idiotic to imagine my Dad re-enlisting in the event of what felt, at the time, like the inevitable coming WW3.

All of his closest chums were army chums. There was Tod, a fellow Sapper who had lost both his legs to a land mine and would take his artificial ones off and merrily throw them aside to go swimming; there was my godfather, Richard, who had won an MC in Italy and there was the irrepressible Basil, who had gone out with the BEF in 1939 and been lifted off Dunkirk beach in 1940.

Get them all together and there would be curry (Indian army officers) a bath full of booze and a cacophony of laughter. They were the most closely bonded, glorious, individuals I have ever known. They had seen adventure and seen death, they had feared death and often been half bored to death but they had all come through it together - and most importantly survived. They were kind, worldly and very, very funny. The very best vintage Englishmen.

As a boy, I would dress up in bits of Dad's old uniform and put on his Sam Browne belt and wage wars in my bedroom with plastic soldiers in which we the British always won and the grey little Germans were inevitably annihilated with toy building bricks and pillows. I would interrogate him for stories and always be a bit disappointed with his response.

Most disappointing of all was his insistence that he had never actually killed anyone. My father, a Royal Engineer, had been a forward intelligence officer, tasked with going ahead of his division and literally seeing how the land lay. It was dangerous work, but the key was stealth. He had dozens of stories of hiding in ditches, or meeting members of the Italian resistance, or holding his breath just yards from German troops - but boys of ten raised on Where Eagles Dare don't want that. They want their Dad to have blazed a machine gun, blown up a castle and taken out half the SS.

Just once did he come literally face to face with the enemy. While trying to find a good crossing point over a river he looked up and saw a Wehrmacht officer on the other side doing just the same thing. Dad confessed that his instinct was to sneak away, but just then the enemy soldier saw him and so he pulled his gun and took a quick pot shot before running frantically away. Unable to sleep that night, he tossed and turned in his canvas bed, half hoping and half fearing that he had killed another human being. That snapshot, I suspect, is what real war was and is like for most people in the thick of it.

My father was a Tory of the old school. Pin striped suit and military tie, he would often have a far away look in his one eye and despite his fairly decent war record would always insist that he had 'done nothing'. He only wore his campaign medals once and that was in 1995 when he and his old pals marched down the Mall. He didn't like show offs and was suspicious of 'men wearing gongs'. He loved Britain but confessed often that during the war itself he had little time for Churchill.

He was also firmly pro-European. He had fought for it after all. Dad loved Italy and Italian cars and food and wine - and women. He believed passionately in the EEC and campaigned for it. In fact that was a fairly consistent theme among his group of friends. There are those who say we only entered for economic reasons but that wasn't how he saw it. He would often say how lucky I was to be the first member of the male line in three generations not to have fought in a war. I was. I am.

All of those men are dead now. My father went when I was still in my twenties and his dear buddies faded away within just a few short years of each other. Am I proud? You bet your socks I am. And that is why, increasingly, I feel it is time to call the official commemorations of it all a day.

You see, these celebrations, whether VE Day, or D Day or even the Blitz no longer have much to do with the people who fought, or suffered, or came through - or didn't. It has been appropriated by the media, the politicians, the pundits, the near right and the far right. Take Farage, a man who to the best of my knowledge has no family at all who participated in either war. How did he spend the election day morning? Posing by a war memorial for photographs. What is the implication of that? That as a nationalist British party UKIP somehow owns a piece of those that saved us from Nazism. No. You don't own the war dead Farage. They were left and right, liberal and Tory, straight and gay, good and bad. They were, after all, not heroes or 'Britons' but human beings. But more than that, what they have left us an extraordinary legacy. The longest sustained period of peace and prosperity in our history. I have not had to go and fight in another pointless war and with any luck the same will be true of my children and grandchildren. 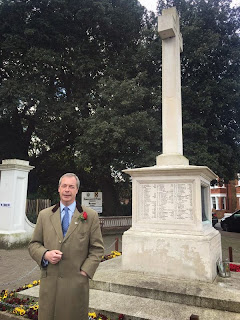 So after this year celebrating the end of the worst conflict in history let us all move on. We should and must remember it, we should study it and learn from it, but we must remember most of all that its true legacy is not marble columns and fluttering flags - but peace. Time to stop remembrance of war and start celebrating that instead.
Posted by The Life and Musings of Kelvin J. Patterson at 09:12